Climate change is not a phenomenon of the future, you can experience enhancing droughts, heatwaves, but floods, inland inundations and fleshfloods in Hungary. According to the climate models, this change is accelererating, thus we have to prepare to more and more extreme weather events in the future.

More than 80% of the population in Hungary feels the impacts of climate change in their daily lives, and is worried about the climate change, reveals the Energiaklub’s country-wide representative survey (made in 2015). Over 70% of the people experiences increasingly hot summers and sudden temperature changes in their towns. Six out of ten people experience more and more frequent heavy rainstorms and tempests, and increasingly moderate winters. 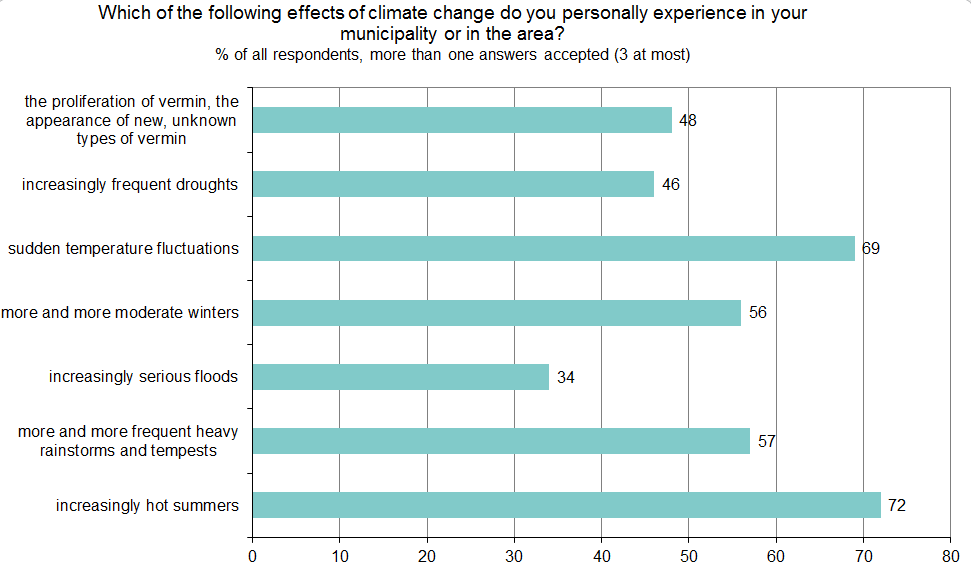 In line with the global trends, Hungary has also observed major changes in its regional climatic conditions in the last 100 years and more intensely in the past 30 years. According to the systematically collected and evaluated climate data series of the Hungarian Meteorological Service (OMSZ), an increase (more than 1,2 °C in average) can be observed in the mean annual temperature since the early ‘80s in Hungary.

According to the OMSZ’s and Eötvös Loránd University’s joint research, the changes in precipitation and its extremities are less detectable than the changes in temperature, however an increasing length of drought periods during all seasons as well as regional dissimilarities can be observed in the trends. Another experienced feature is that the annual precipitation is now gradually falling in the form of intense, rapid showers instead of evenly dispersed rains, especially in summer.

According to climate-models, incidences of extreme temperatures in the summer will increase in the future. The annual mean temperature will increase by 1-2.5°C in the 2021-2050 period while the degree of warming will reach 2-5°C by 2071-2100. Temperatures will be 6 °C warmer on average in the distant future especially in South-East Hungary i.e. the consequences of climate change are territorially differentiated.

Reffering to the models, winter precipitation will increase by 15-20% while summers will observe a 10-30% decrease in rainfall.